Northport NY – M.C. Records is thrilled to announce that Sonny & Brownie’s Last Train by the Ambassador of the Blues, Guy Davis and international harmonica sensation Fabrizio Poggi has been nominated for a Grammy Award in the category of Traditional Blues. This marks the first Grammy nomination in the 30 + year career for Guy Davis and also for Fabrizio Poggi. It is the sixth Grammy Award nomination for M.C. Records and our first since 2007. The award ceremony will take place in Guy’s hometown of N.Y.C. on January 28 at Madison Square Garden. Here’s what Guy had to say when he found out about the nomination, Wow! Grammy nominated! Ain’t that crazy? Fabrizio and I are jumping up and down.

This is a fond look back to the music of the Piedmont blues icons, harmonica ace Sonny Terry and acoustic guitarist Brownie McGhee. Elmore Magazine

You’ll be doing yourself a disservice by not immediately purchaing this first-rate record.
American Blues Scene

Davis and Poggi’s homage to the acoustic blues greats features some great licks, with a selection of classic blues tunes – Twangville

This is an excellent and historically significant collection of standard blues and traditional music. – Black Grooves

Sonny & Brownie’s Last Train is as close as anyone living in the 21st Century will get to enjoying Terry and McGhee in concert. If you love the old masters like I do – or simply are just curious about the way they truly sounded in concert – pick this one up today. It’s Sonny and Brownie live – and taken to another level.  – BluesBlast Magazine

Beautiful dark vocals by Davis, who also dilivers impressive guitar work on both six and twelve stings, while the harmonica playing of Poggi equals the virtuosity of Terry. Rien Wisse (Jazzism, The Netherlands) 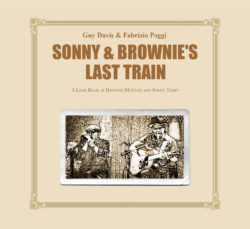