Northport N.Y. – It’s great when we get our music on TV shows but it’s even better when the artist is on the actual show!  The Queen of Blues/Rock Guitar, Joanna Connor will perform a song for the Fox drama “The Exorcist.” The date of broadcast is Friday November 18th, 9PM Eastern. Click the photo of Joanna Connor and one of the stars of the show Ben Daniels for more. 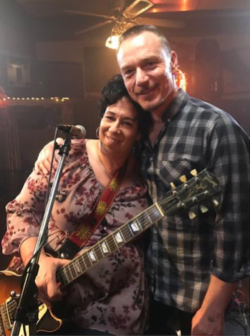 Joanna Connor & Ben Daniels on the set of “The Exorcist”

M.C. Records delivers Connor and her band in all of their upfront presence with an excellent recording containing rock solid imaging and a layered and resonant stage in which Connor’s guitar is free to leap and growl in all its twisted, raw and dynamic force.  Nelson Brill –  Boston Concert Reviews

Connors sings and plays with relentless intensity and virtuosity – Lively-Arts.com

The ability of Joanna’s guitar playing to pull back from the edge is a constant on the album….it is searing, paint peeling, sky writing fretwork from the guitar of Joanna Connor. The Alternate Root

With her dazzling skills on full display ‘Six String Stories’ should win her an even wider audience.
Living Blues

‘Six String Stories’ is her first studio album in 14 years, but thousands of gigs in the interim have only enriched Chicago-based Joanna Connor’s fierce guitar skills and expressive, bluesy vocals.
The Associated Press

She’s one powerhouse of a slide blues guitarist, someone who attacks frets with a beautiful fury and doesn’t let go. Joanna Connor just put out her first release in 14 years and, wow, it’s a keeper.
The Toledo Blade