October 20th,  2020 – Northport NY – M.C. Records is proud to announce that our release by Kim Wilson,  Take Me Back is the highest debut of the week at no. 5 on the just-released Billboard Blues Charts. This is his 7th solo release and his first in three years. The album’s street date was on October 9th.  In 2001 and 2003, M.C. Records released Smokin’ Joint & Lookin’ For Trouble, both were nominated for Grammy Awards in the category of Traditional Blues. 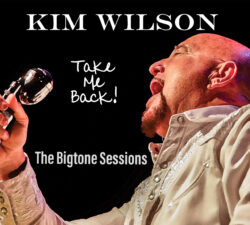 Take Me Back is deep, authentic, and filled with the gut-wrenching blues sounds Kim has made famous for over 40 years. Recorded live in the studio, and in mono, Kim delivers the blues as his heroes did in the golden age of the genre in the 1950s. Kim and his all-star band muscle through 16 tracks with some new Wilson songs and a mix of some great blues and R&B nuggets by the likes of Jimmy Rogers, Jimmy Nolan, Larry Williams, and more.

Glide Magazine: These musicians are so natural and effortless that it’s easy to see why no overdubs were required. Like Wilson, they live and breathe the real deal blues.

The Alternate Root: Take Me Back bleeds Blues authenticity.

Rock and Blues Muse: Take Me Back is unmistakably classic blues, throughout it all, Wilson’s voice is the beacon which leads the assembled players home.

Toledo Blade: The result is just a little more of an authentic, throwback texture. I mean, who does that in 2020, unless you’re pretty darned good and can pull it off, which Wilson is and he does.

Blues Music  Magazine:  A recording Like this is essential to keep the straightforward blues alive!

Midwest Record: Sizzling, smoking and sure to be award winning, this is as hot, bad and authentic as it can ever be.  Killer stuff.