Northport N.Y. – More good news for Sugar Blue, he has won a Living Blues Award for Harmonica player of the year. Click the logo to check out all the winners!

Voyage from Chicago blues harp master, Sugar Blue has been one of the most celebrated roots records since its release on April 29. The outstanding reviews and features have come from Downbeat, Elmore Magazine, The Chicago Tribune and many more. You can find more at http://sugar-blue.com/ 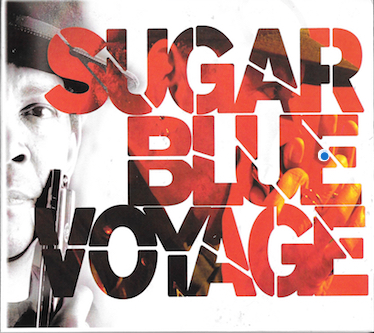 The reviews for Voyage have been wonderful, check out a few!

Voyage is a welcome addition to the recorded oeuvre of a musician who remains a stunning showman on the concert stage, where he belts out blues classics and generates intricate harmonica fireworks – Downbeat

Throughout Voyage, Blue conjures the harmonica virtuosity listeners have come to expect from him, but most of it via an unamplified sound that conveys remarkable tonal warmth and delicacy. – Chicago Tribune

He and his band are riveting, often delivering at breakneck tempos while Sugar Blue soars along, hitting more notes than you can possibly imagine.– Elmore Magazine

Voyage is sweet and soulful and rocking in turns, featuring his distinctive tenor voice, and his magnificent harmonica playing.– The Bluesmobile

Sugar Blue has played and recorded with musicians ranging from Willie Dixon to Stan Getz to Frank Zappa to Prince to Bob Dylan, he is perhaps best known for his signature riff and solo on the Rolling Stones’ hit “Miss You.” Click here for his complete bio, http://www.sugar-blue.com/12bio.htm