Sept. 8, 2021, Northport NY – Guy Davis, The Ambassador of the Blues, will begin a 17-day European tour starting September 9th at the Homesick Blues Festival in Naples Italy. Other stops include Denmark, Switzerland, Romania, and Austria. For more details, click the photo 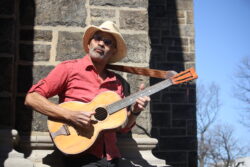 We are so thrilled for all the airplay for Be Ready When I Call You. It’s no. 3 on the July Living Blues Radio Chart. Thank you DJs!!!!! Check it out here.

Be Ready When I Call You marks the fourth record that Guy and M.C. Records have released together and the 13th in his career.

The reviews have been nothing short of outstanding.

Guy Davis has succeeded in delivering a first class, versatile and enjoyable album that also gives us plenty of food for thought. JazznMore

Guy Davis creates one of the most powerful statements in modern blues. Chicago Blues Guide

This only serves to cement Davis’ well-earned reputation as a blues master, no matter if he’s singing or working things out on banjo, harp, acoustic guitar or tambourine. – Elmore Magazine

Musically, it’s on a par with his best work – Twangville

He surely kicks ass on this one! – Living Blues

Strongly recommended for anyone with a deep social conscience and love for music with a message.  – Blues Blast Magazine

He switches effortlessly between all kinds of styles, blues, folk, americana, soul, gospel, it’s all there.  Lucky Dice (Netherlands)

Be Ready When I Call You is vintage, well-worn styles, backing stories that pull no punches, displayed raw and unflinching like the playing.– The Alternate Root

His soothing voice and smoothly flowing music clothes the anger and angst that is impossible to ignore. He has delivered a timely project, his most important one. Glide Magazine

Be Ready When I Call You marks a creative high watermark for Guy Davis as 12 of the 13 tracks were penned by him. The release is a musical gumbo for the ears as Guy incorporates blues, folk, and Americana elements. Guy Davis’ previous record for the label was the 2017 Grammy-nominated record with Fabrizio Poggi, “Sonny & Brownie’s Last Train.”