Northport N.Y. – We at M.C. Records are just thrilled that legendary Gospel and guitar great, Sister Rosetta Tharpe has been inducted for the Class of 2018 by The Rock and Roll Hall of Fame! She will receive the award for an early influence. A complete list of inductees can be found here: https://www.rockhall.com/class-2018-inductees
The 33rd Annual Rock & Roll Hall of Fame Induction Ceremony will take place on Friday, April 14, 2018 in Cleveland. Ticket on-sale dates will be announced in January and the ceremony will be broadcast on HBO.

It happened almost 15 years after we released our recording Shout Sister Shout, A Tribute To Sister Rosetta Tharpe. 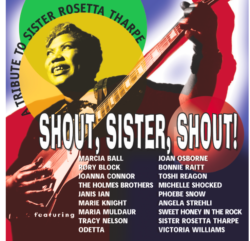 It was 16 Years ago, when I started putting together M.C. Records’ Tribute recording for Sister Rosetta Tharpe. Things were quite different than today, Sister was mostly forgotten. In 2001, few albums were available and most were imports. I was so glad many artists wanted to right that wrong including Bonnie Raitt, Odetta, Phoebe Snow, Joan Osborne, Joanna Connor, Victoria Williams, The Holmes Brothers, Tracy Nelson, Angela Strehli, Marcia Ball, Maria Muldaur and sister’s long-time partner Marie Knight. Thanks to the photographer, the late Terry Cryer for all the great photographs and Gayle Wald for her tremendous liner notes and the writer of the Sister biography “Shout Sister Shout!”

In the 21st century things would be different!

* In 2008 – After a campaign led by Bob Merz, the Governor of Pennsylvania declares January 11 Sister Rosetta Tharpe Day. That evening, a benefit concert is held at Philadelphia’s Keswick Theater to support the purchase of a marker for Rosetta’s gravesite. The concert features the Dixie Hummingbirds, Odetta, Marie Knight

In 2011 – A historical marker is installed in front of Rosetta house on Master Street in Philadelphia. A celebration accompanies its unveiling.

In 2014 Sister Rosetta Tharpe was the subject of a PBS Masters Series.

2016 –  The musical Marie and Rosetta is performed in New York City and more cities will be added.

2017 – The musical Shout Sister Shout is performed in Pasadena.

Sister Rosetta has four videos with over 1 million viewsSister Rosetta Tharpe was one of the most important musicians of the 20th century.

* Her recordings sold millions of copies throughout her career including Strange Things Happening Every Day, Up Above My Head, Down By The Riverside and Rock Me (title of a feature film in the works).

* Was one of only two Gospel artists to make records for the troops during WW II.

* In 1951 Sister Rosetta’s wedding took place at Griffith Stadium in Washington D.C.. Over 20,000 paying customers attended, and a concert was recorded and later released as an album.

* During the 1960’s she would tour the U.K. and Europe influencing a generation of young rockers with her wild guitar style.