January 13, 2023- Northport NY – The Blues Music Award nominations were released earlier this week and M.C. Records received two nods. One for its artist Guy Davis for Acoustic Artist of the Year and for its release of Corey Harris’ “Insurrection Blues” in North America. The Blues Music Awards will take place in Memphis on May 11. More information about the award show can be found by clicking here.

This marks Guy Davis’ 26th nomination from The Blues Music Awards and the previously named W.C. Handy awards. Guy’s latest recording, Be Ready When I Call You was Grammy nominated last year. 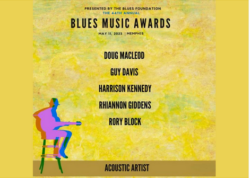 Corey Harris’  “Insurrection Blues” was first released in Europe by BLOOS Records, then we picked it up and released to the rest of the world in November of 2021.  Recorded in Italy under shutdown conditions in 2021, the album returns to the solo acoustic format that’s been Corey’s base since his early days as a busker in New Orleans. But you can also hear between the lines traces of the different styles he’s absorbed, including the roots music he heard during a year’s stay in West Africa. This marks Corey’s’18th nomination from The Blues Music Awards and the previously named W.C. Handy awards

Check out these new reviews of The Insurrection Blues! 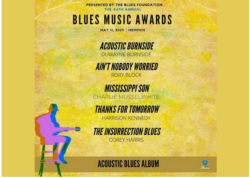 Congratulations to all the nominees in all the categories!